Till you can’t tell the difference

Posted on March 10, 2014 by hasidismfortherestofus 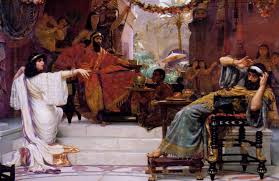 A guest posting by Ariel Evan Mayse (thanks Ariel!): a translation of R. Avraham Yehoshua Heschel of Apta on Purim, from Ohev Yisroel. Get ready. To see the Hebrew original, click here.

Let us begin with the words of that holy man, the Maggid of Mezritch, in explaining
the Mishnah: “all the opposite is found in the boor (golem)” (Avot 5:9). There is a world that is called golem. It is the world of hokhmah (Wisdom), represented by the letter yod. This letter is like the golem, because it is a tiny point. You can make it into whatever letter you would like. This is the meaning of “the opposite.” If you want to transform something—“in the golem (ba-golem)”—you must raise that thing up to the aspect of golem. There you can change it. Thus far are his pure words.

I will help you understand this. Anything that occupies a certain form cannot receive
another one until its initial form is destroyed and it becomes a golem, without any form orspeciﬁc attributes. Only then can it be transformed into whatever you want. We see this with our own eyes. Silver vessels must be melted down ﬁrst before we can turn them into a different vessel. The same is true in the upper worlds. When we raise something up to the world of hokhmah, called golem, then something new can sprout forth from it. This is the meaning of “all the opposite is found in the golem.”

With this in mind, we can explain the sages’ teaching about Purim: “one is obligated
to become so drunk that he does not know the difference between ‘cursed is Haman’ and
‘blessed in Mordecai’ (b. Megillah 7b). This is quite surprising! Nowhere else in our holy
Torah do we ﬁnd that anything good ever came from drinking a lot of wine—especially
drinking so much that you almost leave behind your discerning mind. What good can come from this?

Now Scripture says, “let the king and Haman come to the party” (Esth. 5:4). The
matter is thus. During her celebration Esther did the same thing the High Priest would do on Yom Kippur. He took two goats, which needed to be alike in appearance and height, taking hold of them at once. He cast a lot between them, one for the God and one for Azazel, in order to lift up the Evil One and make him equal to the blessed Creator, as it were. Then the High Priest would confess on behalf of all Israel, raising up the letters of the sins to the world of hokhmah, which is golem. Because of His great love for the Jewish people, the blessed Holy One was pleased by this, pardoning the affront to his glory. This was in order that to bring the angel of destruction into the realm of golem, where things and their opposite are equal as one. Hokhmah is attached to Ayin, as it says, “hokhmah comes forth from Ayin” (Job 28:12). In Ayin anything may become its opposite. This is the deeper meaning of “if your enemy is hungry, give him bread to eat; [If he is thirsty, give him water to drink.] You will be heaping live coals on his head, [and Y-H-V-H will reward you]” (Prov. 25:21).

This is exactly what Esther did when she said, “let the king and Haman come.” She
made him equal to the king, and by doing so broke the power and strength of that wicked
Haman. This is also the reason the meal is referred as the “wine party” (Esth. 5:6), and not the “bread party.” As long as Haman’s greatness was ﬁrmly resolved within the king’s mind (lit. “knowledge,” da‘at), she could do nothing to him, for it is the mind that decides.
Therefore she threw a wine party. They rose even higher than the mind, to the world that is called golem. She changed one thing into its opposite, as she wished, and mourning was
transformed into joy. Esther has already destroyed Haman’s strength. However, it is still up to us to break the strength and power of the wicked Haman, who came from the seed of Amalek, which dwells in the heart of each and every Jew—as individuals, and as a community. Each of us, the people of Y-H-V-H, must uproot the wickedness hidden within. For this reason we too must go higher than the conscious mind (da‘at), in order to truly destroy this element of wickedness. This is the meaning of their sweet words, “one must become so inebriated that he does not know….” Go beyond the mind and enter into the world of golem, where you will not know the difference between “cursed is Haman” and “blessed in Mordecai.” In that realm one thing is equal to its opposite, and you can get rid of that wickedness that dwells within you.